Fat and Genetics: Did You Get it From Your Momma?

Google shows over 3.5 millions search results for “Do my genes make me fat?”

Whoah. Mom and dad can really take a beating sometimes.

In our modern-mechanized and sedentary society, a genetic predisposition towards health complications does exist, but from the collective consciousness in regards to lifestyle modification, saying that genes make you fat takes the power of positive change out of your hands.

In a breaking PubMed January 2014 epidemiological study, scientists have learned that the answer just may in fact be yes.

The only question that matter now, is what can you do about it.

Six months ago, I was at my local grocery store, when I ran into one of my old gym members. She told me about quitting the gym and doing a master cleanse. You know the drill, another one of those week long diets where you starve yourself and go into ketoacidosis only to regain all of the lost weight plus 3 lbs.

“It's in my genetics, I just can't lose weight”, she says while reaching for a 2 liter of Diet Pepsi. It's not that she has completely given up, it's just that she has temporarily lost hope. All the motivation she had for better health is now being used to power her emotional marathon of why she can't change. All she can do now is sprint the curves and walk the straight-aways.

We all can lose hope from time to time, which can yeild indecision and guru-seeking.

The supplement industry has made an absolute killing on people in a spot just like this. Xerox a picture of a six pack spray tanned bikini model holding a fat burner bar on a magazine cover and you'll make a huge profit capitalizing on someone out there who is uneducated and demotivated; they're willing to try anything quick just to feel that hope again. So why does the uneducated and frustrated follower repeat this obviously insane process of yo-yo dieting and calorie restriction over and over again?

Because the media tells us so.

The instant gratification model that attracts the Limbic Brain all begins shortly after birth.

When we are young trust comes naturally.

Bbehavioral Psychology has shown that learning is most important for behavior development in the first 7 years of life, so is it really that shocking to most Americans that the eating habits of our parents are passed on to the children of tomorrow, and in turn, that these children mirror everything thier parents do?

It's no surprise that those who have trouble losing weight in their adult lives are most likely just repeating a pattern that was learned from their parent's lifestyle.

I'm not 100% blaming the parents as we know every human has their own free will. We grow into adolescence and further into adulthood by developing an alternate way of living and beliefs compared to when we were young. However, it is common practice that a cobbler's son becomes a cobbler himself. If I was biased about this then look at the data from the U.S Department of Health and Human Services-

“Looking at the long-term consequences, overweight adolescents have a 70 percent chance of becoming overweight or obese adults, which increases to 80 percent if one or more parent is overweight or obese. In 2000, the total cost of obesity for children and adults in the United States was estimated to be $117 billion ($61 billion in direct medical costs).”

The question we have to ask is if our genetics or behavior is the cause of obesity. Well, the jury is out, and it's obviously not just the genes; it's our learned behavior. So how do we make drastic changes to an obviously broken system? Speak. Go out and talk about it! Become informed, don't settle for the mainstream media high-carb & low-fat diet schemes! The change anyone wants for better health simply just comes down to education. Any learned behavior can be unlearned and refreshed if you put your mind to it.

According to the National testing laboratories in Bethel, Maine- Humans learn the fastest, and have the most retention, when teaching others at 90% followed by a close second of 80% when practicing themselves. 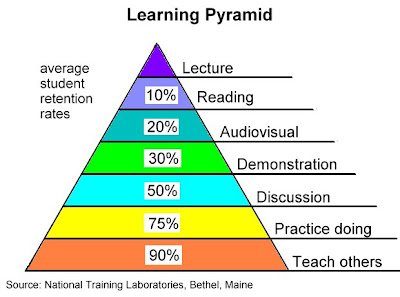 All the way at the bottom there is no shocker that we only retain 20% of what we see when learning. This is why reading about being healthy and losing weight is no replacement for getting off the couch and failing till you get it right! Or happen to know a wellness professional who is passionate about results.

Just like the woman in the grocery store we all have choices; some are easier than others. If you have hope then you have all you need to start over. Finding true health is relearning all those feelings we are taught to ignore.

Josh Trent grew up in San Diego, CA and has lived in Los Angeles, Las Vegas, and Mammoth Lakes. From over 9 years in the fitness industry, Josh brings with him the passion for helping others. He makes best friends with Race Directors, loves getting people active, and is excited about the power of Digital Health & Quantified Self movements.